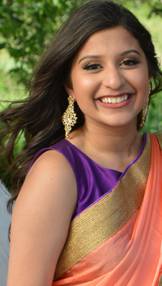 Ms. Phylicia Viruthikulangara is a gifted and talented member of the Chicago Knanaya community with strong Christian values. She graduated from Whitney M. Young Magnet High School, a selective enrollment high school in Chicago which ranks #3 in the state of Illinois. She finished high school as the 2016 class Salutatorian with a 5.22 weighted GPA and scored a 34 on the ACT. Phylicia is both an AP Scholar and an Illinois State Scholar. In addition, Phylicia served as the service project coordinator of the National Honor Society at her school. In the midst of her busy academic, athletic and social activities, Phylicia completed her Arangetram in Bharatanatyam with Soorya Dance School (SDS) and since then, she works as an assistant dance instructor for SDS. Phylicia's hard work and incredible work ethic led her to gain admission into the Guaranteed Professional Program in Medicine (GPPA) at University of Illinois at Chicago.

Phylicia’s accomplishments began when she served as the Junior High class president  at Edison Regional Gifted School. In high school, she founded and led the South Asian Student Association (SASA) as a way to bring her Indian culture to her school community. Through SASA, she taught Indian dance that was showcased in her high school’s Asian American Show every year. She was also a member of her high school’s Poms hip-hop dance team that won the State Championship in 2015 and won multiple city championships. Outside of school, she volunteered as an assistant dance instructor for Everybody Dance Now! (EDN!), a non-profit organization that provides free, weekly dance classes to Chicago’s underserved youth. She organized a dance workshop that donated all profits to EDN! During the summer, she performed cancer related research in oncofertility at Northwestern University’s Woodruff Lab under the guidance of Dr. So-Youn Kim. She also participated in an internship with the Indo-American Democratic Organization. Moreover, Phylicia has played an active role in the Knanaya community by participating in Kids clubs, KCJL, KCYL and receiving awards in annual KCS dance competitions and KCCNA conventions. She also volunteers weekly as a Religious Education teacher at St. Mary’s Knanaya Catholic Church.

Phylicia plans to pursue a career as a physician who serves underserved communities, all the while being an active member of Knanaya community by teaching dance and Religious Education.

Chicago KCS is proud to inform you all that Roy Chelamalayil, ex-KCS Board member and former chairperson of various KCS committees, has been appointed as Respiratory Program Director at St. Augustine College in Chicago. He currently holds master's degree in Health Administration.

He hails from Punnathara. He is married to Sheena Kozhamplackil and has three children, Regina, Peter and Christina. 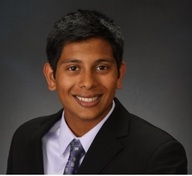 Mr. Philip Abraham a young adult of our community graduated as 2014 class VALEDICTORIAN of North-side College Prep High school, a selective enrollment High school which ranks No.1 in Illinois and 36th Nationwide. Philip a National Merit Finalist, AP Scholar an Illinois State Scholar served as treasurer of Math National Honor Society, board member of French Honor Society and member of the National Honor Society, won the Harvard Book Award in his junior year and completed his high school with a 5.31 weighted GPA, scoring a 35 in his ACT.

For the Community, Philip volunteered at Presence Resurrection Medical center and May Fair Salvation Army and served as Religious Education teacher at Chicago Knanaya church.

Philip will be attending Yale University, one of the top Ivy League Schools in US in fall of 2014.

Chicago KCS congratulates Mr. Philip Abraham on his outstanding achievement and wishes him all the best!  (June 2014) 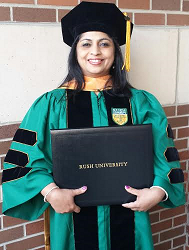 Chicago KCS member, Ajimol Puthenpurayil,earned doctorate in nursing from Rush University in Chicago for her research on a new care model in emergency department designed to reduce the length of stay of psychiatric patients in hospital leading to a cost efficient and  safe and quality care program.

Few health care institutions have already shown interest in this model. Ajimol works as the nursing director at Swedish Covenant Hospital in Chicago and as a professor at North Park University and serves as the President of  Indian Nurses' Association of Illinois.

Chicago KCS congratulates Ajimol on her outstanding achievement and wishes her all the best.(June 2014)

One of the young adults from our community Mr.Greesham - son of Simon & Jessin Kattapurathu and Brother of 11th grader Shelly, has acheived the "Best Student" award from his school which is an Illinois states number 1 graded High School.

He was selected as the North Side College Prepratory High School's VALEDICTORIAN. NCPHSN school is ranked 2nd in the Mid-Western region and is ranked 28th Nationwide. Being selected to such an honered school itself is a very special and noteworthy acheivement. Also, In a recent list of "Illinois Raising Stars" compiled by Chicago Tribune news paper, Greesham was selected as a finalist. He is also the 'National Honors Society Vice-President' at his school.

Greesham has secured an admission for Engineering in the very famous Ivy Leauge CORNELL UNIVERSITY. We wish him the very best and extend our appretiation to the Kattapurathu family.

Shana and Sharon are daughters of Simon & Sibia Viruthikulangara of Bloomingdale, IL

Shana has won the title of Miss Pre-teen Chicago, organized by America's Beauty Pageants, on May 1, 2011, conducted at the Olympic Theater, in Cicero,IL

Thier second daughter, Sharon Abraham has won the 3rd runner-up in the "Miss Jr.Teen Chicago" pageant.

They both will be attending final nationwide pageant Competitions [Cities of America] to be organized in Orlando, Florida.   Both Shana Abraham and Sharon Abraham are active member of KCJL Chicago and have won several awards in talent competions in previous years. Shana was the "KCS Kalathilakam 2008".  They are proud to win this prestigious title as members of the Chicago Knanaya community.

She is currently a senior undergraduate student at Wayne State University School of Medicine’s MedStart B.S. / M.D. combined program. She was chosen to represent the university for her academic  excellence
and leadership on campus and personality, Jeena was elected by the student body and a panel of six interviewers from the dean’s office.

She has also been recognized as a Jesuit St. Ignatius Medalist for her volunteer work, ITW Fortune 500 company’s  "student who promotes peace and desires to make the world a better place”, and President of Wayne State American Medical Student Association.